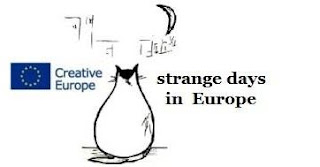 We introduce for the first time to Greek readers three writers awarded with the European Union’s Literary Prize: Donal Ryan‘s "Spinning Heart’’ (Ireland) Bjorn Rasmussen’s "The Skin Is the Elastic Covering that Encases the Entire body’’ (Denmark) and Rudi Erebara’s "The Epic of the morning Stars (Albania)". We also introduce the work of Spanish Nobel prize-winner, Vicente Aleixandre to the Greek market for the very first time; also, the not so widely known literary, hybrid texts of celebrated French composer, Erik Satie.
Writers, translators, editors and cover illustrators talk about the books they worked on and discuss about this project that is co-funded by the European Union’s Creative Europe Translation Program. Strange Days Books, an independent publishing house since 2013 was the only publisher in Greece whose project was approved by the program for the year 2019.
Host: Danae Bletsa. Music performance: Danae Bletsa & Ann Kristin Sofroniou

Posted by Strange Days Books at 04:58 No comments: 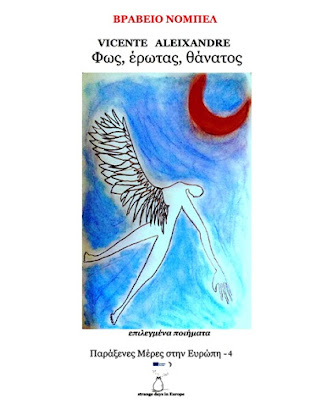 Strange Days Books present for the first time in Greece a collection of selected poems by the Nobel Prize-winning Spanish poet Vicente Aleixandre. Spanish Nobel-prize winning poet, Vicente Alexeixanrde is a poet whose sublime work has oddly enough never been translated in Greek in spite of its undisputed literary quality. We are proud to present his work for the first time ever to the greek readers.

The anthology "Light, Love, Death" with introduction and translation by Nancy Aggeli who has been involved for many years with the work of the poet. The book  includes 43 poems from collections that cover the entire range of his work. Of course, this edition, which belongs to the series Strange Days in Europe, would not have been possible without the co-funding of the European Union translation program through Creative Europe. The book is published with a cover by Adriana Minou.

Vicente Aleixandre was born in Sevilla (Spain) on April 26, 1898. He spent his childhood in Malaga and he has lived in Madrid since 1909. Studied law at the University of Madrid and at the Madrid School of Economics. Beginning in 1925 he has completely devoted himself to literature. His first book of poems, Ambit, appeared in 1928. Since that date he has written and published a score of books. In 1933, he received the National Literary Prize for his work Destruction or Love. He spent the Civil War in the Republican zone. He fell ill and remained in Madrid at the end of the conflict, silenced by the new authorities for four years. In 1944, he published The Shadow of Paradise, still maintaining his independence of the established political situation. In 1950, he became a member of the Spanish Academy. His books and anthologies have been published up to the present day. The Swedish Academy awarded him the Nobel Prize for Literature for the totality of his work in 1977.

Nancy Angeli was born in1982. She studied Journalism and Mass Media Communication at the Aristotle University of Thessaloniki. Since 2008 shehas lived in Spain where she works as a translator and as a Greek and Englishlanguage teacher. She is the author of two short storycollections and has participated in the annual collective anthology of short stories “Bonsai Stories”, Vol. 2014, 2015 & 2016 published by the acclaimed Greek literary review “Planodion- Bonsai Stories” in collaboration with the “Gavrielides Books Publishing House”. In Spain she has published the bilingual poetry collection “Antagonía” forthe Andalusian poet Juan Carlos Friebe. She collaborated with the “Centre of Byzantine, Modern Greek and Cypriot Studies” of the University of Granada and with the “Institut Virtual Internacional de Traducció”of the University of Alicante.She is a regular contributor to many online magazines both as a writer and as a translator.

Posted by Strange Days Books at 10:22 No comments: