Strange Days present the third book in the Strange Days in Europe series, Les cahiers d'un mammifere / (A mammal’s notebook), with texts by pioneering composer and satirical writer Erik Satie. Satie, who was one of the most characteristic figures of French culture in the first decades of the 20th century, was recognized many years later as one of the most important and influential artists of his time that contributed to the birth of many  progressive artistic movements. The texts - published for the first time in Greek translation - are translated from the original French by Popi Kotsifi. Cover, illustrations, introduction and editing are by Andriana Minou. 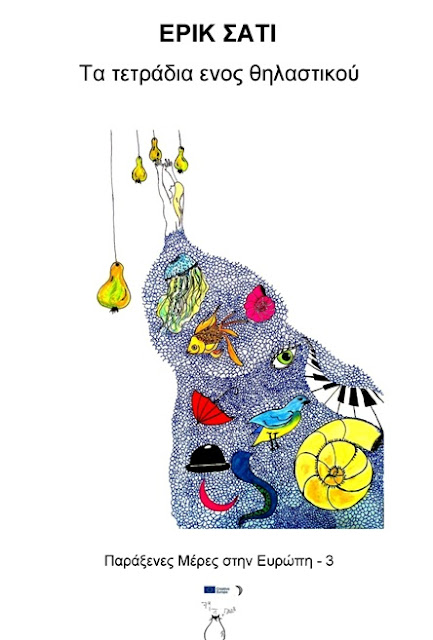 The Strange Days in Europe book series is co-funded by the Creative Europe translation program. Thanks to this program of the European Union, Strange Days - the only publishing house from Greece whose proposal was approved by this program in 2019 - can offer you books that would be very hard - if not impossible - to have the opportunity to read in GREEK translation. This book is a special case.

Among the award-winning and (mostly) contemporary books presented in the series, we also chose to translate into Greek the texts of a genius who was not actually – strictly speaking – a writer. Satie was a composer, whose value was recognized many years after his time; precisely because his compositions, his ideas, his inspirations but also his texts were very much ahead of his time.

The writings of Erik Satie – accompanied with explanatory comments by the translator and editor – are timeless, as they often seem to echo future artistic movements that defined the 20th and even 21th century but, most importantly, they are funny, unpredictable, sarcastic and sometimes very touching. The same goes for the sketches inspired by his texts by Andriana Minou; a comic book that will complement this book and will be released very soon from Strange Days Books.

Posted by Strange Days Books at 23:43