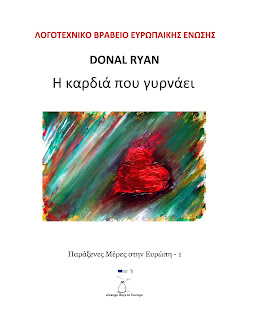 This is the first book of the ‘’Strange Days in Europe’’ translation series that consists of a total of eight books; five of them are written by authors from five different European countries and three were originally published in Greek by “strange days books’’ and will be translated into Spanish. This book series is co-financed by the European Union's “Creative Europe’’ platform. As a matter of fact, it would not have been possible without it, especially for a small cooperative publishing house in the region of Greece. When your ambition exceeds the reality of the publishing landscape in your country, you ought to seek a way to fulfill it outside its borders. And if you're lucky, you may find it. So thanks to the Creative Europe translation program, which awarded a fund to the proposal of Strange Days Books in 2019 (the only publisher from Greece to receive such an honour), we can now offer to Greek readers some excellent books to which they wouldn’t have been introduced otherwise.
The first one to be published is "The Spinning Heart," by Irish author Donal Ryan, a book that has won many awards including the European Union Literary Prize. All the books in this series were not chosen at random.  We believe you will find a piece of your own "heart" in each of them. “The Spinning Heart” is one of those books that set their seal on their era. It was initially rejected by 47 publishers - who were reluctant to publish it (apparently because it was too realistic for their liking) – yet thankfully found its way to the public and swept awards and distinctions in Donal Ryan’s country and across Europe.
It is a devastating book, one of the most important literary works of our time and a book that is also “ours”. You will immediately realize this when you get engrossed in it and get to know its protagonists. You will recognize very familiar characters, very familiar voices, situations that are very close to us Greeks; not just because the plot unfolds in the years of the economic crisis of the past decade that hurt Ireland as bad as Greece. The similarities go much deeper and essentially extend to the roots of human tragicomedy; we are all the same when it comes to this. But we need a very special work like "The Spinning Heart" to feel it deep in our souls.
Coincidentally, the book was written during the time of a serious economic crisis that affected both Ireland and Greece (as well as many other countries, of course) and is to be released in our country amid a global crisis. It is, by analogy, the "Grapes of Wrath" of the 21st century. But that's just one reason to read it; some of the rest are its unique literary value, the power of narration, the heartbreaking realism in the depiction of the lives of several human figures suffering the consequences of a world in crisis, the unique ingenuity of the way the author speaks through twenty one characters and his mastery of this technique reminiscent of theatrical monologues of different characters through whom he "speaks" to the reader.
The title’s “spinning heart”, as you will see while reading the book, is a rusty toy at the front door of a farmhouse that is blown away by the wind. Through this minimal symbol, Donal Ryan depicts the way our heart turns here and there, a prey to chance, the absurdities of fate and decisions that define our lives in absentia, only to let them drift in the winds of time. Our refuge, now and always, will be art, solidarity and love. The love that surrounds this book; thwarted love, desperate love, lost love and - against all odds – persistent love; love for what has been lost, love for what will never happen, love for what we hope will come. We invite you to this journey of self-knowledge, despair but also hope. “Spinning Heart” is one of those extraordinary books, which, as some reviews pointed out, “you remember forever”.
DONAL RYAN/ SPINNINIG HEARTGREEK EDITION/ Η ΚΑΡΔΙΑ ΠΟΥ ΓΥΡΝΑΕΙSTRANGE DAYS IN EUROPE-1TRANSLATION: Gregory PapadoyiannisCOVER BY: Andriana MinouPAGES: 154PRICE: 10 eurosISBN:978-618-5278-37-3

onal Ryan was born near Nenagh, County Tipperary, in 1976. He was a civil servant for many years, and was only able to devote himself to writing from 2014, following the success of The Spinning Heart, the novel he wrote during the evenings of the summer of 2010. Ryan received 47 rejections before finding a publisher. His novels have gathered a great deal of critical acclaim and The Spinning Heart was longlisted for the Man Booker Prize. He lives in County Limerick with his wife and two children.

Posted by Strange Days Books at 01:28