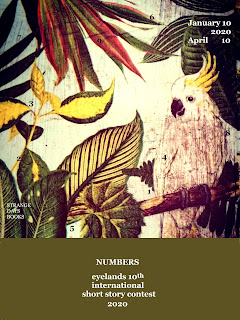 The contest runs from January 10th through April 10th, 2020
The theme of the contest this year is «Numbers»
First prize: A five-day stay in the island of Serifos
First three winners’ stories published in two different anthologies (Greek and English).
All the stories of the shortlist will be published in a special English edition, released through amazon.com & strange days books.
Entry fee: 10 €
Judge: Gregory Papadoyiannis
**
RULES OF THE CONTEST
* Theme of the contest: Numbers
*Entries must be short stories, of any genre, maximum length is 2,500 words and must be previously unpublished in a book, printed magazine or web-based journal. Entries must be in English.
* The contest closes at midnight UTC on 10th of April
*This is an international contest. There is no restriction such as nationality etc of the author, but you have to be 18 years old on the 11th of March 2020 to enter the contest.
* No “eyelands” editor, judge, or relative of theirs, is allowed to enter.
* Entries must be submitted electronically (see below).
* Winners and the shortlist to be announced on June 10th, 2020
* Copyright of manuscripts remains to the author.
* In addition to the story being published on www.eyelands.gr, the author's acceptance of the prize gives eyelands.gr the right to include the story in the anthology that will appear in book form. Entry grants permission to include the three prize winners and the shortlisted stories in the book which will be published and will be available from “Strange Days” publications.
* There is a limit for the stories to be published in the anthology: no more than 25. In case we receive more than 200 submissions.
* There will be two collections of stories - one that will be published in Greek including the translated stories of the first three winners of the English Section and another one with all the shortlisted stories of the English Section.
All prize-winners and shortlisted writers have to renew their approval of the publishing of the anthology till the 1st of October, 2020.

First prize is a 5 day holiday on the island of Serifos in August 2020. The grand prize winning writer will be a guest of honour and present his/her story and his/her work in the 6th Sand Festival. Air tickets not included.
The three prize winners will also get a free copy of the book with the winning stories of our contest & certification document & a Greek handmade ceramic from the collection of Artifacts plus publication in the anthology of the shortlisted stories of the contest (Greek section), translated in Greek –and of course a free copy of this book too!
First prize winner’s ceramic is not only handmade but specially designed for the specific contest every year.
• All the shortlisted stories will be published in the anthology. The book will be released through “Strange Days” publications and www.amazon.com in November, 2020. All the shortlisted writers will also get a free copy of the book! (We send the books to your address once. In case of return we can’t repeat it).
• An interview with the first prize winner will also be featured in eyelands.gr
• In case the first prize winner does not claim the prize of staying in Serifos till the end of the 10th of July 2020, the second (and then the third) prize winner will be notified in order to take her/his place.
-First prize winner will be the judge of next year’s 11th contest!

NOTE: Free entry for the prize-winning writers of previous contests
--

Τhere is also the option to make the entry payment via bank/wire transfer. If you choose this option please ask for further details
* After the payment is complete, you can send the e-mail with your story attached in word. doc /docx format to:
eyelandsmag@gmail.com
or
strangedaysbooks@gmail.com

writing in the subject line: Eyelands Short Story Contest or just ΕSSC
*An email confirmation that your entry has been received will be sent within three/four days after receiving your e-mail
*We don’t accept postal entries
* We do accept simultaneous submissions
* Every writer can submit more than one story as long as they pay the full entry fee for each story
* Name and address of the author should appear only in the body of the email
*The title of your story can be anything other than “Numbers”
*There is no entry fee for the prize winners of previous eyelands international short story contests

-
EYELANDS -  ISSC
Eyelands.gr literary magazine in collaboration with Strange Days Books  organize an annual international short story competition, which is the only international short story contest based in Greece. Every year, writers from all the continents of the world participate in it. The competition consists of two categories; Greek and International (for the international section we only accept stories in English).
The competition has been running continuously for the past nine years, offering hundreds of writers the opportunity to see their short story printed in one of our collections, created through the contest entries. For many of these writers it is the first time that a story of theirs is printed in a book or featured online. The jury reads all submissions blind.
STRANGE DAYS BOOKS
Strange Days Books is a cooperative publishing organization based in Crete, Greece.
We publish books by young writers from Greece but we also publish books by writers from around the world. In the past seven years of our existence we have published Greek translations of books by writers from countries such as the USA, England, Denmark, Spain, Bulgaria e.t.c. For many of these authors this was their first book ever to be published! Strange Days Books also publish first releases of books by foreign authors in English!
Strange Days Books is an entirely independent publisher, primarily interested in showcasing the wealth of the new writing voices of Greece. We work closely with our authors in order to create books that will appeal to booklovers, books about the present, books contemporary readers can relate to, books that strive to push the art of literature forward, books written with talent and passion, books that challenge the way we see the world, books that burst with new ideas and intriguing perspectives, books that have something to say and were not written for merely commercial purposes. In other words, we create books with character together, steadily growing into a community of artists and art-lovers that represent and promote the truly new literature of Greece, not only through publishing but also through a literary festival, the only international short story competition in Greece, theatrical play and novel competitions, book events and more. Every summer we organize Sand Festival - a literary festival held literally on the sand of a Greek island.

EYELANDS BOOK AWARDS
In 2018, too, we, Strange Days Books & Eyelands.gr decided it was time to launch Eyelands Book Awards and Three Rock Writers’ Residency Program. The former is an international contest that gives the opportunity to a writer to win a great prize; a holiday in Athens, Greece, where he/she will have the chance to talk about his/her work to Greek readers and meet Greek writers in a special ceremony and also gives the opportunity to an unpublished writer to win a contract and see her/his book published by Strange Days Books. It was high time for Greece to have an international book award.

Sand Festival is a celebration of literature, poetry, music, art and anything you can bring to a Greek beach to share with all participants of the festival. Every summer - since 2015 - we make an open call for submissions on a specific theme by writers, poets, musicians and all sorts of artists who would like to join us on a Greek island in order to create a spontaneous celebration of creativity! The Festival has taken place in Gavdos, Koufonissia and Milos and each year happens on a different beach with camping facilities in order to offer participants the option of cheap accommodation. Participation is free and open to writers and all sorts of artists from anywhere in the world (for writers/poets, submitted texts must be in English). The texts that are selected and read at the festival each year are published in an anthlogy by Strange Days Books, a publishing cooperative that also organises Sand Festival.
-
JUDGE
Gregory Papadoyiannis was born on the Greek island of Crete in 1961. He holds a university degree in law and journalism, and also studied film-making. His career history includes work with newspapers, magazines, radio and television, initially as a sports correspondent and later as a columnist and editor. At the same time he worked as a translator, working in collaboration with prominent publishing houses. He has also been active within the realm of theatre. In 1991 he received the top national award for new playwrights. He has translated the plays of David Mamet and Tennessee Williams for their premieres in Athenian theatres, and has served as Assistant Director within the National Theatre of Greece. He directed two short films, screened at Short Film Festivals in Greece. He has written scripts for both short and long films, in addition to working as a screenwriter and Assistant Director for a variety of television series.  Gregory is a co-founder, administrator and writer for the books & cinema section of the website www.eyelands.gr .  He also co-ordinates and leads a series of workshops on creative and collaborative writing all over Greece. After living in Athens for several years, he now lives on the island of Crete. He is the author of the novel “Sniff” and the short story collection “The city beyond the river”. Some of the stories of this collection were published (in English translation) in magazines and included in anthologies in the USA. He is also the author of the travel book “52 eyelands, a sentimental guide through the Greek islands” and two comic albums. His novel «The baby Jazz» was published in the USA from Fomite Press in February 2017.

Posted by Strange Days Books at 03:20 No comments: 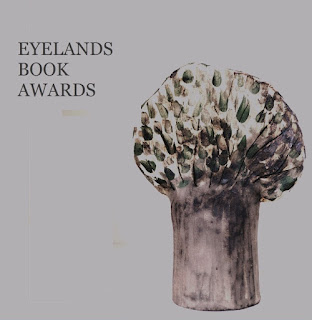 The book that won the Grand Prize for Unpublished Books will be translated in Greek language and published in 2020 from Strange Days Books
The winner of the Grand Prize for Published books wins a Five-day holiday in Athens between 21-25 of May 2020 where she will take her prize in a special ceremony.
Grand prize winners will be the judges for next year’s Eyelands Books Awards 2020 in their prize category

Prize winners will get via mail a special handmade ceramic designed especially for Eyelands Book Awards and a certification document for every prize.
Every prize winner is entitled to a 50% discount stipendium for our 3 Rock Writers’ Residency Program 2020 under the condition that they will send a proposal about a writing project by the end of March 2020.
Posted by Strange Days Books at 03:17 1 comment: