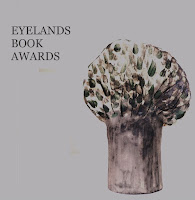 We are glad to announce the finalists for the Eyelands Book Awards 2019.

First of all we would like to thank all writers for their submissions.
Last year in our very first time to launch the contest it was a surprise to receive so many books.
This year with many more submissions our …problem was that we received so many good books and
it was a very hard work for us to choose the finalist. One more time we wished we could include
more books in this list but we just can’t. The only thing we could do as we did last year is to nominate few more books as finalists for the novels category due to many more submitted book to this specific category.
Congratulations to all of you, for all your great books.

These are the finalists for every category:


We remind you that the final results will be announced on December 20th, 2019

Posted by Strange Days Books at 11:50