Strange Days Books proudly announce the release of Paul David Adkins novel “When Sirens Call”in Greece, translated in Greek language.
A great story from the writer who was the first prize winner of Eyelands Short Story Contest in 2012 (english section)  with the short story ''Kalimera'', actually a story that it was a part of the -later to be- “When Sirens Call”novel. Translated by Gregory Papadoyiannis. Cover painting by Yannis Petrakis. 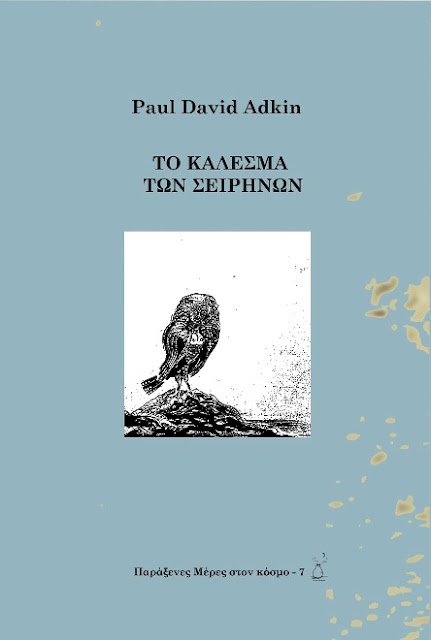 FROM THE PREFACE TO THE GREEK TRANSLATION
(...) Since 2001, the Aegean Sea has been a necessity for me, and I have returned almost every year since.The idea for this “Greek book” took shape around 2004, the year in which the narrative takes place. On an intellectual and literary plane “When Sirens Call” is really a return to Homer’s Odyssey, via Joyce’s Ulysses, and I was concerned with the idea of the necessity of preserving the spirit of those things that may, at first glance, seem to have become outdated and unnecessary. For me, the Aegean is a precious, beautiful and melancholy place. A place that no longer seems to make sense in our world, and yet, in reality, it is one of the few places left that still do make sense.

That is why I return there, year after year.
There is a lot of deep love and anguish in this book. I hope the Greek reader will find it a positive and enjoyable experience, and that this foreigner’s view has been able to capture a little bit of the truth of this wine-dark sea world he loves so much, and which has inspired him so constantly 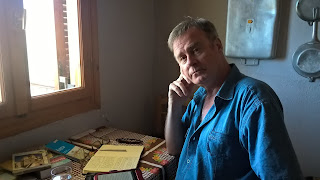 
Paul Adkin was born in Long Eaton, Derbyshire, England, in 1958, at his aunt’s house. His early infancy was spent in a council house in Bridge Street, Sandiacre, which runs parallel to the Erewash canal. The contrast between gloomy brick and the calm, fecund life of the river; between the poverty of the town and the richness of the natural world, has been a deeply ingrained dialect in Paul’s artist’s psyche. In 1965 his father, a clerk at a railway company, decided to pull up roots and migrate to Australia.


After a seven week voyage, on assisted passage, the Adkin family set themselves up at the Nunawading Migrant Hostel in Melbourne. In the most uninspiring atmosphere of the eastern suburbs, it was his discovery of Swift, Dostoevsky and Patrick White that began to open Paul’s mind to the beauty and power of literature.


Paul remained in Nunawading until he started the drama and literature course at Rusden in 1976. Without any scholarship he did part time work in factories and farms while he was learning stage craft. At Rusden he had started writing plays and after graduating he wrote and directed his first play at the La Mama Theatre in Carlton, “The Jack and Jill Story.” In 1982 he was given the prestigious title of artistic-director-in-residence at the Anthill Theatre in South Melbourne where he directed his play “Schadenfreude”.


In 1983 he left Melbourne for Japan and lived a year there teaching English and working on a novella, inspired by a Thomas Mann short story, “Gladius Dei”. That novella would eventually be published thirty years later with the title of “Art Wars”.


In 1984 he did a whirlwind tour of Europe that introduced him to the Mediterranean countries. He worked as hotel cleaner, later hotel manager and broker in London. Two very sterile years were spent in London until he escaped to Spain and Madrid.


In Madrid he married Isabel Martin and started writing a novel about the Spanish attempts to discover Australia. The result of this was the Terra Australis Incognita trilogy, the first part of which was “Purgatory”. This found a literary agent but was rejected by over one hundred publishers. Eventually it was published by Paul himself in 2012, in ebook format.


In Madrid Paul returned to the theatre and he has been the founder of three theatre companies. Big Bang and Ñu Accents were created to do plays that could teach English in Spanish schools. His third company, Ñu Teatro, produced Paul’s scripts, either translated or written by Paul himself in Spanish.


With the millennium Paul and his wife started holidaying in the Greek Islands and very soon a strong spiritual tie was developed between them. His short story Kalimera won the Eyelands short story competition in 2012 and was translated into Greek. He has been acclaimed by his Greek readers for possessing a sharp, observant eye of the Greek culture and atmosphere. When Sirens Call was another product of this very happy and fruitful relationship with the islands.

Posted by Strange Days Books at 10:25