The contest runs from January 20th through March 20th, 2018
Theme of the contest: “Dreams”
First prize: A week holiday οn the island of Crete (for 2 people)
Three prize winners: publication in anthology, handmade ceramic gift, certificate, complimentary copy of the anthology.
Shortlisted stories: Publication in anthology
Judge: Gregory Papadoyiannis
Collaboration: Eyelands.gr (online literature magazine) & Strange Days Books (publishing firm)
Entry fee: 5€
Welcome to the First International Eyelands Flash Fiction contest! We're looking for short stories, of 500 words maximum in any genre on the theme of “Dreams”.
Seven years since the beginning of our annual international short story competition, which is the only international short story contest based in Greece, we decided to run a second international contest for short fiction. We hope it will be as successful as our first one and gain also the same respect and recognition on an international level plus giving the opportunity for more writers to see their work published in Greek and enjoy a holiday in Crete!

RULES OF THE CONTEST
* Theme of the contest: «Dreams».
*Entries must be short stories, of any genre, maximum length is 500 words and must be previously unpublished in a book, printed magazine or web-based journal. Entries must be in English.
*This is an international contest. There is no restriction such as nationality etc of the author, but you have to be 18 years old on the 21st of January 2018 to enter the contest.
* No “eyelands” editor, judge, or relative of theirs, is allowed to enter.
* Entries must be submitted electronically (see below).
* Winners and the short list to be announced on June 10th, 2018
* Copyright of manuscripts remains to the author
* In addition to the story being published on www.eyelands.gr, the author's acceptance of the prize gives eyelands.gr the right to include the story in the anthology that will appear in book form. Entry gives permission to include the three prize winners and the shortlisted stories in the book which will be published and will be available from “Strange Days” publications.

*Each writer may submit as many stories as they wish, provided they pay a separate entry fee for each story, but only one story of every writer may be included in the short list
* Simultaneous entries are allowed (same piece of work simultaneously entered in other competitions) but you must alert us if your work is placed as a winner or runner up, and your entry will be withdrawn from the competition.
You may voluntarily withdraw your entry from this competition by request via email.
You as the author will retain copyright, but you must allow us temporary and exclusive publishing rights for our anthology if requested.
Withdrawn submissions (for any reason) will not be refunded.
You may be disqualified if any of the rules are not followed.  We will accept corrections to your work from you from 10th of June till 10th of July.-

ENTRY FORM AND PAYMENT
Pay via paypal - See the banner in eyelands Home Page.
Click the «buy now» button. Fill the description with: Dreams
Entry fee is 5 euros
* After the payment is complete, you can send an e-mail with your story attached in word doc /docx format to:
info@eyelands.gr
writing in the subject line: Eyelands Flash Fiction Contest
*An email confirmation that your entry has been received will be sent within three /four days of receiving your e-mail.
*We don’t accept postal entries
* Name and address of the author are to be submitted in a separate attachment accompanying the entry.

-
PRIZES & HONORABLE MENTIONS
- First prize is a week holiday on the island of Crete. Three Rock, (Triopetra, Rethymnon, Crete) is a studio for 2 people with beds for two children also available). Air tickets not included. You can see more details here:
http://three-rock.blogspot.gr/
First prize winner can choose their preferred week of his/her stay in 2019 except for the dates between July 15th – August 25th.
Three more prizes will get a free copy of the book with the winning stories of our contest & a certificate & a Greek handmade ceramic from the collection of Omodamos Clayart*
All the shortlisted stories will be published in an anthology. The book will be released through “Strange Days” publications and www.amazon.co.uk in November, 2018
All the shortlisted writers will also get a free copy of the book!
* Entry fee: 5€
Judge: Gregory Papadoyiannis


Eyelands.gr literary magazine in collaboration with Strange Days Books  organize an annual international short story competition, which is the only international short story contest based in Greece. Every year, writers from all the continents of the world participate in it. The competition consists of two categories; Greek and International (for the international section we only accept stories in English).
The competition has been running continuously for the past seven years, offering hundreds of writers the opportunity to see their short story printed in one of our collections, created through the contest entries. For many of these writers it is the first time that a story of theirs is printed in a book or featured online. The jury reads all submissions blind.
The English section of the competition has been recognized as a truly reliable, fair and serious short story competition. Every year, many reputable websites, such as Duotrope, booktrust.org.uk, justacontest.com, www.londoncomedywriters.com, virtualwritersinc.com. Prizemagic.co.uk www.artsjobs.org.uk and many others post the announcement of our contest, which has earned its reputation year after year, by honoring all its promises, following the rules meticulously and meeting all criteria that allow a contest to gain respect and recognition on an international level.

Gregory Papadoyiannis was born on the Greek island of Crete in 1961. He holds a university degree in law and journalism, and also studied film-making. His career history includes work with newspapers, magazines, radio and television, initially as a sports correspondent and later as a columnist and editor. At the same time he worked as a translator, working in collaboration with prominent publishing houses. He has also been active within the realm of theatre. In 1991 he received the top national award for new playwrights. He has translated the plays of David Mamet and Tennessee Williams for their premieres in Athenian theatres, and has served as Assistant Director within the National Theatre of Greece. He directed two short films, screened at Short Film Festivals in Greece. He has written scripts for both short and long films, in addition to working as a screenwriter and Assistant Director for a variety of television series.  Gregory is a co-founder, administrator and writer for the books & cinema section of the website www.eyelands.gr .  He is the curator of the only Greece-based international short story competition, run by www.eyelands.gr . He also co-ordinates and leads a series of workshops on creative and collaborative writing all over Greece. After living in Athens for several years, he now lives on the island of Crete. He currently works as a translator and editor for Strange Days Books Publishing (www.strangedaysbooks.gr )
He is the author of the novel “Sniff” and the short story collection “The city beyond the river”. Some of the stories of this collection were published (in English translation) in magazines and included in anthologies in the USA. He is also the author of the travel book “52 eyelands, a sentimental guide through the Greek islands” and two comic albums.
His novel «The baby Jazz» was published in the USA from Fomite Press in February 2017.
- 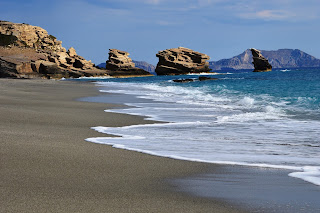 Triopetra beach (in the south part of the island of Crete) is one of the last hidden paradises in Greece due to its outstanding natural beauty. Three Rock is a very special studio just a few hundred meters from Triopetra beach. Three-Rock is a unique studio designed to accommodate two to four people with a lot of space that allows you to cook, dine, relax all day if you want and can simply and easily be tailored to your tastes. After all these years and so many prize winners authors as guests, Three Rock  is really a Writers resort!
Mind that Triopetra beach is at the very centre of South Crete, which means (provided you have a car) easy access to places like Spili, Preveli, Plakias, Amari plateau (westward) & Agia Galini, Matala, Phestos (eastward) and everywhere in Crete!

Posted by Strange Days Books at 04:13