Inna Kitaychik with her story ''Brutus'' is the first prize winner of Eyelands 7th International Short Story Contest for the year 2017. As it happens every year we are curious to know more about our first prize winner so here's  Inna answering to our questions about her story, her writings, Greece and her future plans! 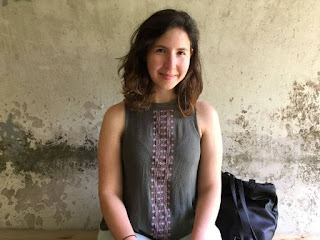 It's the second time, after Seth Libby (2014) that the winner is from United States.  We hope that Inna will be in Greece and Crete for her holidays next summer and probably have a lot  more to say about all these!! 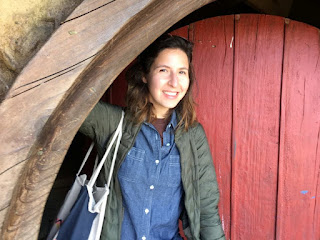 I was very excited! When I loaded the website and began reading, I saw the word «Brutus» and my first thought was «wait, but I wrote a story called Brutus» and then when I saw my name it dawned on me that  I was in fact the winner. It was hard to believe for a few minutes and then once I understood, I was very happy and very honored.
I found out about the contect through a website called «Poets & Writers»: https://www.pw.org/
I have never been to Greece before.
Yes, in fact my parents went to Greece for the first time last year and it was their favorite vacation. They kept talking about how friendly the people were and how delicious the food was, and how relaxed they felt, and how lovely the scenery was. I imagine Greece in the summer is beautiful, especially near the ocean; I imagine the seafood is delicious and there are interesting festivals to go to.
It is strange to win any contest! I only recently started to submit my stories; «Brutus» was only the 4th story I’ve ever submitted to any publication (and I have not submitted anything since). I thought that his particular contest may have some appreciation for the theme of the story since the characters are from Europe and the story is based in Europe, specifically the narrator is a famous character from Greece’s ancient history.
I started writing when I was a teenager, and have been writing on and off since then, but this year is the first time I submitted my stories to any publication.
I’ve always felt close to the story of Cassandra; I read as much of Greek Mythology as I could when I was a child; and her tragic story always stayed with me. Several year’s ago, I read «Cassandra» by Christa Wolf and loved that Wolf painted a picture of what Cassandra’s life may have been like. I was also very interested in the tragedy of Brutus, especially for the fact that history and language tends to demonize him, even though he acted to protect the institutions that we find so valuable today, and are in fact the basis of our free societies. But the impetus for the actual story was a dream. I had this dream during a time that I had begun to write again, and in the dream Cassandra is preparing to go to Brutus as he is resurrected. I knew right away I wanted to write a short story about it and spent the next few months doing research to get as many geographical and historical details correct as I could.
I won a college prize for a poem I wrote in college.
I plan to keep writing short stories and am working on a longer novel that’s based in the future and spans several countries including the US and India.
–
INNA’S BIO
Inna Kitaychik was born in Belarus, brought up in New York City, and now lives in California. I studied art history in college and urban planning for her master’s degree. She now works in the environmental field. On a creative level, she has written prose and poetry since high school. She is interested in how science and technology alter and elevate the human condition. Inna is currently working on a story that challenges the cautionary tale trope often found in futuristic novels and instead explores post-apocalyptic utopias. She would like to think that there is something to look forward to! 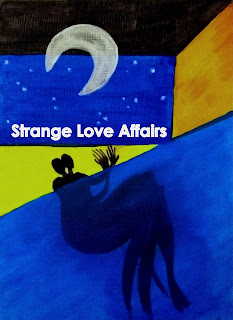 THE STRANGE LOVE AFFAIRS collection (cover painting by Andriana Minou) with all the prize winner and shortlisted stories of eyelands 7th International Short Story Contest is scheduled to be published in Greece in December 20th, 2017 from Strange Days Books and will be available via amazon.com

Posted by Strange Days Books at 00:58