WHEN YOU LEAST EXPECT IT 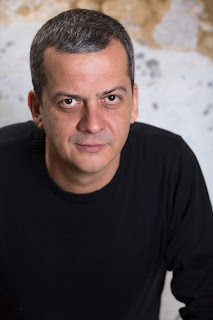 Αntonis Tsirikoudis was born in a village close to Komotini, north Greece, in 1976. He lived for three years in Australia and another three years in Tallinn, Estonia, before moving to Heraklion, Crete. He studied Philosophy and did his Master’s Degree on Special Education. He has a passion for travelling and learning foreign languages. For the past two years he has been writing a novel with another 11 writers. He has also translated Dianna Torres from the poetry anthology “Poesia desde el fin de la era del petroleo”. He is a member of Paraxenes Meres and this is his first book.

COVER PAINTING by
Mathew Halpin is an Australian visual artist and qualified theatre set designer. In his theatre work he has designed for opera, dance, drama and film. The artist has had many solo shows with his last big one in Athens earlier this year. Over the last twelve years he has been living in various European cities including London, Tallinn and now Heraklion. Mathew's painting themes tend to look at serious local and global issues but done in a humorous way. This year Mathew's work was twice on the cover of 'Athens Voice' magazine and in 2012 he was featured in the local documentary, 'Cretativity' by director Manolis Kritsotakis. Currently Mathew is the visionary behind, 'The Lakkos Project'. The project involves the community working with the Municipality to bring back value and art to Heraklion's most neglected area.

**
EVEN IF IT'S FOUND IT WILL CHASE ME
Maria Psoma Petridou

Maria was born and lives in Thessaloniki – Greece. She is an english teacher. She has published two poetry collections, «Lifetime Service» 2006, «A second pair of wings» 2010. She writes poetry & fiction in greek and in english. In 2006 she was awarded the 2nd prize for her poem «The Bate» from the Greek – Australian Cultural League of Melbourn, in 2009 the 2nd prize: Antonis Samarakis» for her story: «Even if it’s found it will chase me». A lot of her work has been edited in Literature Magazines in Greece and on the internet. **CONER PAINTING byEMMI COTOULA
Maria teaches Creative Writing. She is the co-ordinator of a book club for six years and of a writers’ meet up. The last four years she’s been a collaborator in http://www.eyelands.gr as well as a judge of its poetry and story competitions.
–
Posted by Strange Days Books at 11:11 No comments: